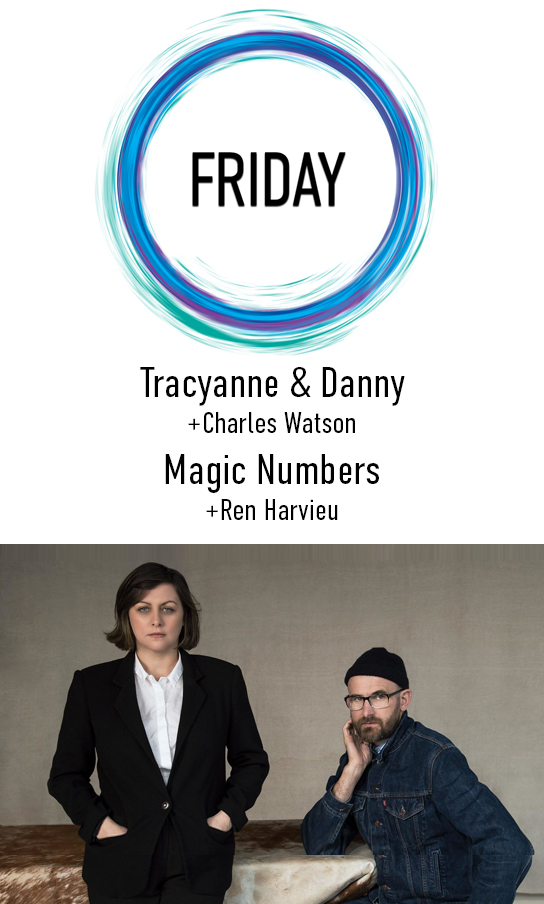 Tracyanne hails from Glasgow, Scotland. London-born Danny is based in Bristol, England.

Tracyanne & Danny is not a diverting curio or a wee stop on the road to someplace else. It is a shared artistic aesthetic, forged over time. They have figured out how to fit round each other and work together, creating a rewarding musical synergy

Charles Watson – the London based songwriter/producer and member of indie duo Slow Club and garage-rock super group The Surfing Magazines. Charles recently released his debut solo record Now That I’m A River on 18th May via Moshi Moshi Records.

The Magic Numbers are a UK-based four-piece comprising two pairs of brothers and sisters (Romeo and Michele Stodart, Sean and Angela Gannon) who are known for their unique harmonies, melodic hooks, songwriting craftsmanship and timeless sound.

The band quickly shot to media attention after selling out London’s Kentish Town Forum solely on the strength of their loyal following, before the release of their self-titled 2005 debut album. This record was subsequently nominated for the Mercury Music Prize. The Magic Numbers went on to become one of the nation’s best-loved bands and have toured around the world with the likes of Brian Wilson, Neil Young & Crazy Horse, The Flaming Lips, Sonic Youth, The Who, Morrissey, U2 and Bright Eyes to name a few.

The Magic Numbers released their latest album Outsiders in May 2018.

Ren Harvieu is an English singer/songwriter from Salford, Greater Manchester.

Ren was introduced to music by her mother. While in sixth form college, she performed in Musical Theatre and entered several talent competitions before uploading some of her own recordings to MySpace.

Ren was discovered on MySpace by a local music manager. After being introduced to Music Producer Jimmy Hogarth she began working on demo’s and was signed to Universal music when she was 18.

Ren started recording an album but in May 2011, but before it could be released, she broke her back in what she describes as a ‘freak accident’ After a 14-hour operation, Harvieu spent months recovering at the Royal National Orthopaedic Hospital.

On December 5, 2011, the BBC announced that she had been nominated for their BBC Sounds of 2012 poll. After releasing the singles “Through the Night” and “Open Up Your Arms” her first album ”Through the Night” was released on Island Records on 14 May 2012, entering the UK album chart at No 5.