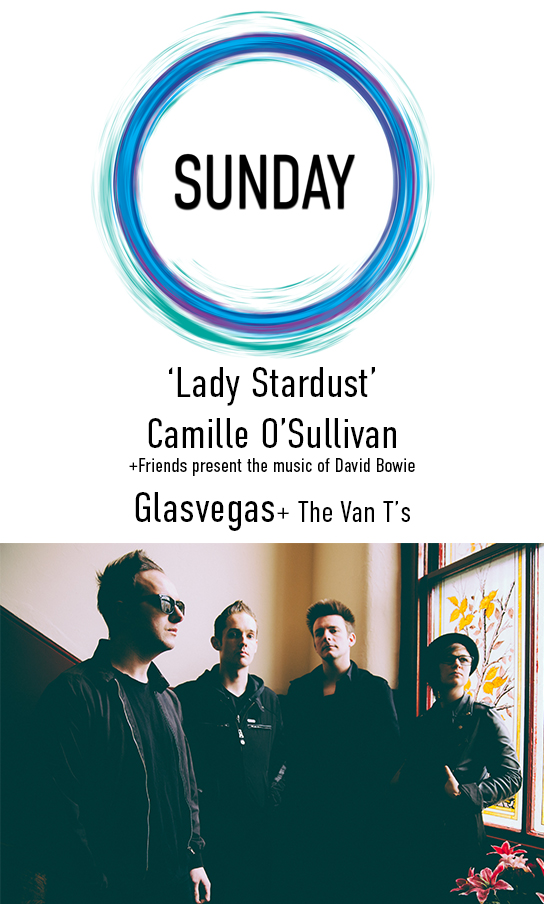 A major highlight of each of the preceding festivals, has been the curated concert celebrating the work of a legendary artist or band using the cream of UK musical talent to reimagine, reinterpret and celebrate their work. Having explored the music of Neil Young, Kate Bush and Fleetwood Mac in the past, this year the festival tackles one of the most innovative, charismatic and talented of them all as Irish vocalist Camille O’Sullivan brings together a line-up of stars to perform the work of David Bowie.

Born in London of a French mother and Irish father, Camille moved to Cork, Ireland when she was a child. Prior to running away with the ‘circus’ ‘The Famous Spiegeltent’ and La Clique touring the world, she took a circuitous route to becoming a performer. She studied Fine Art Painting for a year and then went to UCD and graduated as an Architect, winning the prestigious Architectural Association of Ireland Award in 2000. She lectured in University and exhibited in the Royal Hibernian Academy as a painter.

Self taught as a singer with a background in acting, it was whilst living in Berlin, she became intrigued by the narrative direct music of Weimar composers Eisler, Hollaender and Weill, described as ‘art song: exploring themes of politics, sexuality, life’s degenerates, democracy seedier side of life, desolate love’, and on her return home was inspired by the late great AgnesBernelle performances back in Dublin’s now defunct Da Club where O’Sullivan had also started to sing. After she had a serious car accident- with a year to recuperate she decided to leave architecture to become a performer.

More recently Camille was invited to perform on the BBC’s seminal music programme, Later WithJools. She was a guest star in the legendary Oliver award winning La Clique, of which she is an original cast member, in London’s West End. She recently toured with Shane McGowan and Sharon Shannon. She appeared in the Barbican alongside Jarvis Cocker, Mary Margaret O’Hara and a tribute to the music of Nick Drake performing with Martha Wainwright, Graham Coxon, Beth Orton, Harper Simon, Vashti Bunyan and Stuart Murdoch. She performed recently at the Barbican tribute to Jacque Brel with Marc Almond, Diamanda Galas and Momus.

However one could argue they should need no introduction.  One of the most successful Scottish musical exports in recent times, known globally for their unique sound and powerful lyrical content, they are a band that have never compromised; never conformed; commanding respect from their peers and critics alike and enjoy a fiercely loyal worldwide fan base.  Glasvegas are a band who on their own terms are forging an undeniable legacy in terms of how many up-and-coming Scottish bands and even some established ones (who shall remain nameless) have been influenced by Glasvegas…especially Allan’s emotive Glaswegian vocal delivery.

September 2008 saw the release of their self titled platinum selling debut album “Glasvegas” which reached No.2 in the album charts and eventually selling almost 500,000 copies worldwide.  Less than three months later the band released a six track Christmas themed EP entitled “A Snowflake Fell And It Felt Like A Kiss”.  This Christmas EP was produced and recorded in a remote castle in the Transylvanian mountains of Romania.  Both of the aforementioned releases received widespread critical acclaim with their stunning debut receiving a nomination for the coveted Mercury Music Prize in September 2009; a year after it’s release.

Their sophomore long player follow up stylised as “EUPHORIC /// HEARTBREAK \\\” was released on the 4th April 2011.  The NME made it their album of the week and awarded the album 9/10.  Reaching the Top 10 in the UK and No.1 in Sweden it was heavily influenced by the bands six month stay in Santa Monica, California.  Two years and several world tours later, including festival performances at T in the Park (Scotland), Glastonbury (England), Splendour in the Grass (Australia), Lollapalooza & SXSW (USA) the band left one major label for another and in September 2013 “Later…When The TV Turns To Static” saw the light of day becoming the bands third official studio album release.  Written and produced by James Allan and recorded in his native Glasgow the album is once again a departure from the previous release and arguably more introspective.

Comprised of twin sisters Hannah and Chloe Van Thompson (guitar, vocals), Joanne Forbes (bass) and Shaun Hood (drums), 2016 was a breakout year for the band. Premiere’s on the likes of Huw Stephens’ BBC Radio Introducing show, Noisey, Consequence of Sound, Clash Magazine, The Line of Best Fit and Dork were followed by support slots with Yuck, Rat Boy and Honeyblood. The band also appeared at festivals T in The Park, where they headlined the BBC Introducing Stage, Electric Fields, Wide Days and Stag and Dagger. 2017 has seen the band continue to make their mark having supported The Jesus & Mary Chain in Amsterdam at the renowned venue Paradiso, played a support slot with Clean Cut Kid at London’s Scala following this up with two packed shows at this years Great Escape.