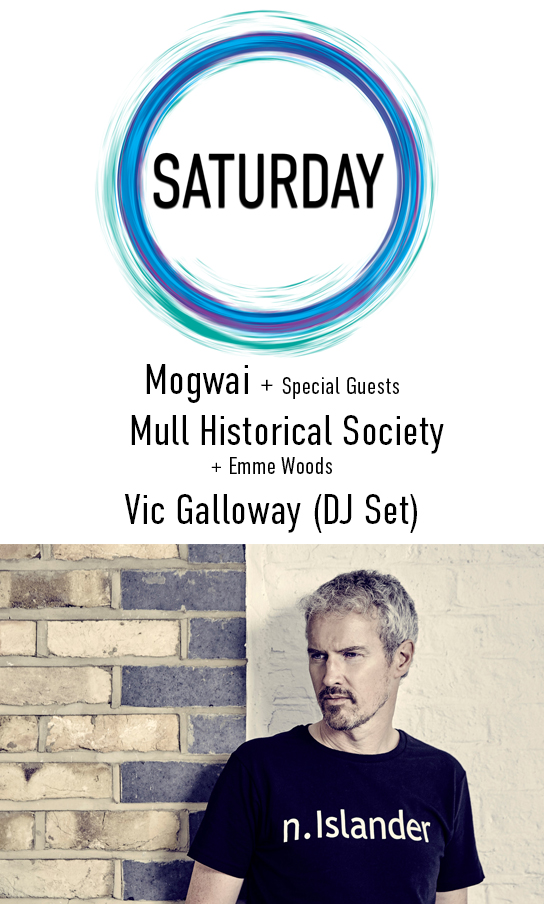 For twenty-two years Mogwai have been making the rest of us metaphorically pass out: in rapturous awe, in brutalised dread and transcendental promise. Since 1995 Glasgow’s post-rock pioneers have been a sonic perfect storm, the musical equivalent of both Francis Bacon’s horror paintings and William Blake’s visions of angels in the trees (or, if you like, the aural equivalent of Blake’s Songs of Innocence and of Experience Showing the Two Contrary States of the Human Soul, except by exuberant Scottish jesters in sturdy rain- wear, here in the 21st Century).

These are exceptional days for the Lanarkshire quartet, now in their 22nd year of creative singularity. Eighth studio album Rave Tapes was a top ten album in 2014, “in the proper charts,” notes a chuffed Braithwaite (on its release, the biggest-selling vinyl album of 2014); their 20th anniversary ATP season at Camden’s Roundhouse in 2015 featured artists who’d inspired them (Public Enemy, Godspeed You! Black Emperor, GZA, The Jesus & Mary Chain); an email correspondence began in 2015 between Braithwaite and his hero Iggy Pop (16 years after Punk Rock from Come On Die Young featured a sample of Iggy Pop gnarling, mag- nificently, over “trashy old noise” in 1977) while the Atomic tour of 2016/17 was acclaimed worldwide, includ- ing their show in Hiroshima, a dramatic experience which moved the band to tears. “It became kind of 3D and really on top of you,” notes Burns, “I count that tour as one of our best achievements.”

Arriving in 1995 Mogwai were 70s-born punk rock renegades who “hated everything”, who named them- selves after the comedy-horror gonk in Gremlins, whose lifelong politicised worldview inspired the 1998 EP No Education = No Future (Fuck The Curfew), an indignant protest against a Strathclyde Police initiative demonising Lanarkshire teenagers. Skateboarding kids who loved Nirvana, The Cure and Star Wars, their 1999 merchandising t-shirt in the pre-millennial, post-Britpop wilderness declared Blur: Are Shite. They aligned themselves, instead, with the symphonic divinity of Canada’s Godspeed You! Black Emperor, their own terror-rock epic Mogwai Fear Satan (from debut album Young Team, 1997) pioneering late-90s “post rock” instrumental sorcery. Pavement’s Stephen Malkmus, with late-90s foresight, pronounced them “the band of the 2Ist century”. Their autonomous, uncompromising attitude remains steadfast today, releasing music on their own Rock Action label since 2010, now home to a diverse spectrum of equally maverick minds.

Colin MacIntyre is an award‐winning musician, producer, author and playwright. He has released eight acclaimed albums to date, most notably under the name Mull Historical Society, having achieved two UK Top 20 albums and four Top 40 singles, since his Gold‐selling debut album, ‘Loss’. His debut novel ‘The Letters of Ivor Punch’ (W&N/Orion) won the 2015 Edinburgh International Book Festival First Book Award. He has been voted Scotland’s Top Creative Talent at the Glenfiddich Spirit of Scotland Awards, as well as into the Greatest Scottish Artists of All Time public poll, and has toured worldwide, including with The Strokes, Elbow and REM, and has played all the major festivals.

He has performed live on the U.S. College radio circuit, on Radio 4, 6Music, Radio 1, Radio 2, MTV, LATER WITH JOOLS HOLLAND and THE JONATHAN ROSS SHOW, among many    others. 2018 will see the release of Colin’s new Mull Historical Society album ‘Wakelines’ on Xtra Mile Recordings, Produced by the Mercury Award‐winning songwriter and Brit Award‐winning Producer Bernard Butler (Suede, McAlmost & Butler).

Soul, sass and sparks collide to create one of the most exciting female singers of our generation. Blending rock ‘n’ roll and blues influences with a hypnotic brood and incredible musical talent; Emme Woods has curated a truly bespoke 60s sound that bangs the drum for everything that’s great about the Scottish music scene right now. Simply put, Emme Woods is an original.

That said, Scotland does not define this twenty-three year old. Nor does it confine her. Packing up and touring Spain, causing intelligent chaos at gigs at The Great Escape in 2017 and playing self-promoted gigs in the city of Angels LA in recent months, Emme Woods is the true definition of a go-getter. Un-phased and never waiting on an opportunity to find her, she lets the music do the talking and all while her pride and joy dog Bubbles sits side of stage, or by a fur coat by the amps.

Fantastic passion and with a heroic spirit; Emme Woods is feminine + ballsy, grungy + angelic, sultry + brazen and all the while with a strong grasp of the lonely-hearts club. No dream too vast; no other artist has a penchant for songwriting in such an organic light.

The Lemon Tree, After the Mull Historical Society Set

Vic Galloway is an established and respected broadcaster, journalist and author based in Scotland. With 17 years of experience from 1999 to the present day he has presented weekly music programmes for the BBC, including 11 years broadcasting for Radio 1. He continues on BBC Radio Scotland every Monday night playing new and emerging music, offering exposure and LIVE sessions to the country’s best acts first. He also regularly contributes to BBC 6Music; presenting shows, documentaries and specials for the network.

Over his years on air, he has been the first BBC presenter to exclusively play and give coverage to artists such as Franz Ferdinand, Biffy Clyro, Calvin Harris, Chvrches, Django Django, Young Fathers, Frightened Rabbit, King Creosote, Twilight Sad, Mylo, Twin Atlantic, Admiral Fallow and many, many more.

As a DJ, he has played in Student Unions, festivals and clubs across the UK, USA, Scandinavia and Europe.